The Art Of Patience

The last few days I have sat staring at my blank screen wanting to write but just not being able to get my mind into it. I started posts about Charlie Hedbo, debating whether I am Charlie or whether I am not Charlie. But considering it turned out to be a debate with myself about it, I decided to not hit the publish button.

Don’t get me wrong, I don’t take what happened to Charlie Hedbo lightly, it is tragic and I understand such tragedy. Having worked as a journalist in a developing country, I have seen it happen to my former colleagues, where a group of men would show up and kidnap them and sometimes threatened and sent back, but sometimes found beaten in a ditch and there are times even shot to death, all for having the courage to expose corruption.

While Charlie Hedbo wasn’t exposing corruption, the end result was pretty much the same. They decided to be controversial and the price for it was 12 lives. But I digress.

After hearing for days on end about Charlied Hedbo and Paris, I was taken back in time to my trip there.  Considering I did not want to write about Charlie Hedbo, I started a post about my visit to Paris with an ex boyfriend.  While there we drank French wine, ate French cheese, watching the lights of the Eiffel tower light up from our hotel room. But how much can I say about that too ? It was one of the best vacations I had, where I had to pinch myself to believe that I was in the city of love. But that was a few years ago, the memory and pictures still there, but the boyfriend long gone. Why dig up the past, so hence that’s another post that stays unfinished and unpublished.

Instead maybe I can write about my year so far, which fortunately seems to be taking off to a great start. My first vacation for the year planned, application to run the New York City Marathon has been submitted and I have had requests for cooking lessons, which seems to only prove that this is gonna be a great one.

I know I have mentioned in previous posts that I find it difficult to teach people to cook, because I obsess over perfection. However, when one of my customers requested a cooking lesson, I found it hard to say no. I decided maybe I was onto something, maybe giving cooking lessons from the privacy of my home could turn into a new hobby and that this was a good way to learn to control my obsession with perfection.

Most often my friends or boyfriends dislike trying to cook with me. I would start off with every intention of staying away and watching, but 2 minutes of watching them do something, which I consider is incorrect, would send me over the edge and wanting to take over.

There are times my boyfriend, has threatened to lock me up in a room, if I don’t stop standing over him, giving him instructions. So most often I get banished from the kitchen, till the cooking is done and the table set.

Therefore, this request for cooking lesson, turned out to be great way not to just impart some of my cooking knowledge, but also maybe learn some restrain myself. It was going to be a win-win situation.

However, I did stress over it for days, not just the menu, but over if  I could realistically let go of the reigns and let someone else do the work and not want to take over, because of my lack of patience. This was going to be the making or breaking of my cooking lessons.

The morning of the lesson I felt like energizer bunny had taken over me, I started cleaning my apartment and then made dessert and decided in order to stop obsessing I need to go run.  Nine miles later, energy spent, I was back trying not to over think anything.

My students (yes it ended up becoming 2) showed up on time with bottles of wine, which is always a good way to start an evening of cooking.

To my surprise, I managed to take a step back and let them do the work. Who is to say that maybe the glass of wine did help in that situation.

At the end of the evening, I did learn one thing too, that given the right circumstances, I could take a step back and give up control in the kitchen. So next time someone offers to cook for me, I think I can stop giving them unasked for advise, take a glass of wine, grab a book and enjoy my evening, while someone else slaves over the stove. It seems after all, I am learning the art of patience and letting go. 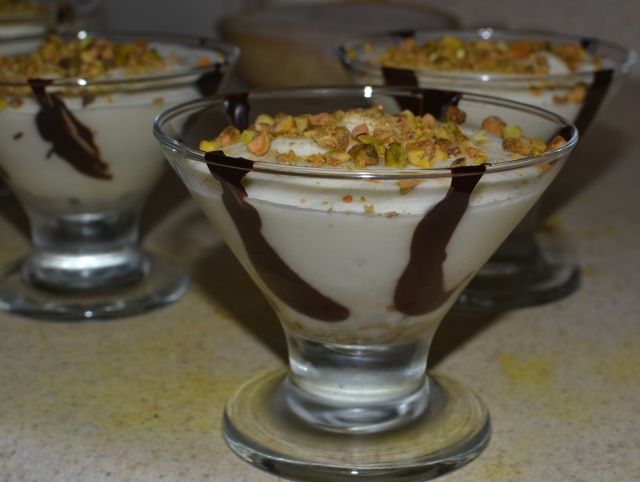 About my random musings

I am originally from South East Asia and I moved to the US about 15 years ago to follow my heart. My heart has since been broken a few times, but I continue to be on journey of trying to mend it. I could talk about running, baking or writing in a small crowd, but put me in a room full of strangers and I will be the one standing in a corner people watching. When I am not writing or running, I would be in my kitchen, flour strewn all over the kitchen counters, music playing in the background and me just rolling and folding dough, excited about what my creation will turn out to be. Besides that I love passionately, when I love, I give it my all, not always a good thing, but that is who I am. I jump both feet in and sometimes I come out with regrets but having learnt a lesson. I believe everything happens for a reason and this is my place to share bits and pieces of my life, my adventures and sometimes misadventures. Hope you enjoy reading my stories as much I enjoy sharing them with you.
View all posts by my random musings →
This entry was posted in Food/Baking, Life, Love, Running, Uncategorized, Writing and tagged baking, beautiful day, Blogging 101, breakup, Charlie Hedbo, comfort food, dating, dreams, excitement, food, friends, friendships, half-marathon, heartbreak, holidays, life, love, messy kitchen, relationships, running, vacations, weekends, writing. Bookmark the permalink.

18 Responses to The Art Of Patience